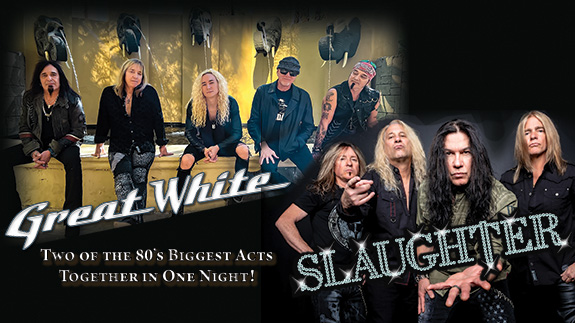 Great White has been rocking for 40 years in the music business and continues to perform amazing rock shows. Their mantra must be, these songs are bigger than any one member. Their arsenal of songs include the Grammy nominated Best Hard Rock Performance hit, “Once Bitten, Twice Shy,” plus hit songs “Rock Me” and “Save Your Love.” Great White has sold over 10 million albums worldwide, has six Top 100 Billboard hits, nine Top 200 Billboard albums, two platinum albums, and clocked the top of MTV four times.

In 1990 SLAUGHTER hit radio, MTV and the U.S. touring circuit like a tornado- coming seemingly out of nowhere to roll through everything in its path and turn it upside down Their first hit single, “Up All Night” certainly fit into that mold, their second chart-topper, “Fly To The Angels” was more representative of the spirituality and awareness that goes into most of the band’s music and lyrics. What’s most important is that their music is still here. Here’s to SLAUGHTER and to 30 YEARS of Rock n Roll, the Love Of Music and the Love Of Life.

Tickets go on sale Monday, November 14, at 9am.