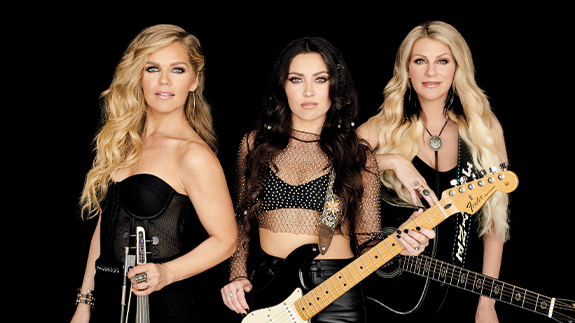 Proclaimed by Billboard as the “Next Hot Trend in Country Music” and likened to The Chicks for a new generation, Runaway June is comprised of Stevie Woodward (lead vocals/guitar/harmonica/piano), Natalie Stovall (vocals/fiddle/guitar), and Jennifer Wayne (vocals/guitar).

Wheelhouse Records trio’s Top 5 single, “Buy My Own Drinks” was the highest charting song by a female group since The Chicks in 2003. “Lipstick”, “Wild West” and “When We Were Rich” are just a few of their other top hits. Their debut album Blue Roses (2019) received critical acclaim and was included on Rolling Stone’s and Paste Magazine’s best albums of the year lists. Most recently on tour with Luke Bryan’s 2021 Proud To Be Right Here Tour, the award-nominated trio’s bright, rootsy new EP, backstory, is out now.