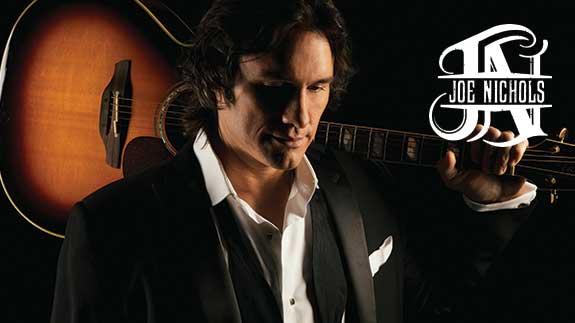 Multi-platinum Red Bow recording artist Joe Nichols is one of Country music’s most praised traditional Country artists. His latest album NEVER GETS OLD is available now and features his new single “Billy Graham’s Bible,” which hits Country radio on May 29. Nichols’ album CRICKETS debuted in the Top 3 on the Billboard Country Albums Chart and spawned the two multi-week #1, RIAA gold-certified hits “Yeah” and “Sunny and 75.” Nichols has six #1 hits and eight Top 10 singles to his credit, including chart-toppers like “Brokenheartsville,” “Tequila Makes Her Clothes Fall Off,” and “Gimmie That Girl,” and Top 10 smashes like “The Impossible,” “If Nobody Believed In You,” “What’s A Guy Gotta Do,” “Size Matters,” and “I’ll Wait For You.”

The 4X Grammy nominee is the winner of the Academy of Country Music’s “Top New Male Vocalist” award, the CMT “Breakthrough Video of the Year” award and the prestigious “Horizon Award” from the Country Music Association. Nichols is currently touring the U.S. performing his own headlining dates.

Tickets on Sale Monday, March 28 at 9am.